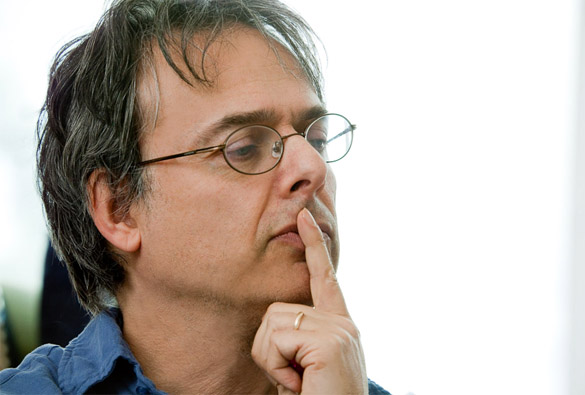 "Aspiring poets used to come to W.H. Auden, and he would ask them why they wanted to be poets. If they replied, 'Because I have important things to say,' he would answer, 'Forget it.' But if they told him, 'I just kind of like hanging around words and hearing how they bounce around together,' he would say, 'then there may be hope for you.'

“That’s the way I feel about philosophy," says Stephen Yablo. "I like hanging around ideas and seeing how they bounce around together, and I get naturally excited about whatever the problems are. It just sort of meshes with the way I think.”

“I think my profession really chose me more than I chose it,” he says. “I had always had the impression life was able to proceed only because people ignored all kinds of things, things you had to ignore in order to keep on going—for instance, the possibility Descartes raised that it’s all just a dream. Or the possibility that everything will be different tomorrow: that fire will be cold and ice will be hot. I’ve always been drawn to things that people generally ignore, and all of a sudden you see it, and you say, ‘Wow, that’s bizarre.’”

Offering an example, Yablo knocks on his office table and says, “Most people think tables are solid. But a physicist comes along and tells you that, yes, a table seems like a rigid structure, but all of its atoms are separate and in motion, and, when you come right down to it, a lot less of the table than you think is solid matter and a lot more of it is empty space.”

Holding up the Descartes volume, he continues, “See this book? It’s red, plainly red. But if you view it under a microscope, it doesn’t look red at all. Go even closer, and the whole idea of color doesn’t even apply any more. It’s just a bunch of dots, moving around. It’s all about how the world strikes us, versus what science tells us is really going on.”

Yablo's dissertation was called Things—which is also the title of a book forthcoming from Oxford University Press, which published his earlier work Thoughts. In his dissertation, Yablo addressed ongoing philosophical debates about the differential nature of objects (chairs, tables) and events (weddings, hurricanes). He also talked about the relationship between the things' essential natures and the names we give them.

Again Yablo picks up the Descartes book to frame an example. “Suppose you have a book,” he says. “It has certain properties. It’s red. It’s printed on paper. It’s a specific size. Some people think that, among those properties, some are more important than others. They say that essentially it’s a book; it couldn’t have existed if it wasn’t a book. The other stuff—that it’s red, that it has a certain number of pages—is not as important. There’s a sharp distinction.

“The world is just sitting there. It doesn’t demand to be conceived any particular way. It’s just that you come to it with whatever questions you’ve got."

Yablo’s dissertation led to a job offer from the University of Michigan, where he rose from assistant to associate professor. Then, in 1998, both he and his wife, noted feminist philosopher Sally Haslanger, came to the MIT Department of Linguistics and Philosophy.

Yablo now teaches two to three undergraduate courses a year. In a survey course, he introduces students to, as he puts it, “things like God, knowledge, right and wrong, and personal identity.” A higher-level course covers the basics of metaphysics, including causation, time, and identity; another looks at paradox and infinity and explores “logical puzzles that relate in an important way to the foundations of mathematics.”

But the lion’s share of Yablo’s time is spent working—formally and informally—with graduate students. His graduate course is always jam-packed; Rayo estimates that at least 20 of the department’s approximately 30 philosophy graduate students are enrolled in Yablo’s seminar. Moreover, Yablo has served as chair or member of the dissertation committees of more than a dozen PhD candidates who went on to fill faculty seats in eminent programs. Past protégées are teaching at Princeton, New York University, MIT, Cornell, the University of Michigan, Harvard, and Duke, among other institutions.

Calling each Yablo class “a work of art,” Rayo says, “In philosophy, it can be hard to explain what the issue is, why it’s worth discussing, and how actually to make progress on an issue. Steve was very good at explaining the ton of information he was giving us, why it was important, and how to proceed. His presentation was always clear and well-done. Indeed, one of the main issues I address in my book Possibility and Content: Metaphysics without Deep Metaphysics originated as a response to a question that came up in one of his seminars.”

Another former student, Carolina Sartorio, PhD’03, who now teaches at the University of Arizona, remembers, “Steve was my graduate adviser at MIT, and he was an amazing mentor. He’s a combination of a brilliant mind, an unassuming personality, and a constant openness to new ideas. He is particularly excited about discovering and working through ideas together with his students. I remember we used to have these meetings where he’d write his thoughts as we talked about something, and by the end of the meeting I would leave with pages and pages of Steve’s scribblings.”

Richard Holton, who succeeded Yablo this year as head of the philosophy section, adds, “The graduate students all love him. In part that’s because he’s funny, but his humor is all in the service of the point he is making. He can be particularly insightful by making a joke.” The same openness to ideas and wry humor that endear Yablo to students also make him a valued colleague. Professor Robert Stalnaker says that as philosophy chair Yablo was “the best kind of academic administrator: an effective minimalist who worried only about the important things.”

Says Rayo, “Steve is a particularly great person to talk to when you have an idea and you don’t quite know where to go with it. Recently I was working on a project and it was a little half-baked. Normally it would take about 30 minutes actually to explain the idea once I put all the pieces on the table. So I took about three minutes to put the basic pieces on the table, and I was about to start assembling them, but Steve had already gotten it. He knew what the new idea was just by being given the ingredients.”

Regarding the celebrated Yablo humor, Rayo says, “In general, academic meetings can be dutiful affairs, but when Steve chaired our meetings it was one gag after another. Progress was made—we definitely got through all the issues—but the tone was so appealing that everyone looked forward to them. One time," Rayo adds, chuckling, “we were trying to explain to the upper administration how dire our funding situation was. Steve was doing this PowerPoint presentation, and he said, ‘These are our largest donors.’ He showed a picture of an elderly couple. A few minutes later, he mentioned that they were not just our largest donors, but our only donors. Finally he told us they were his parents. It was hilarious, and it also got across something very important. That's Steve." 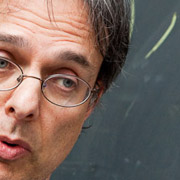