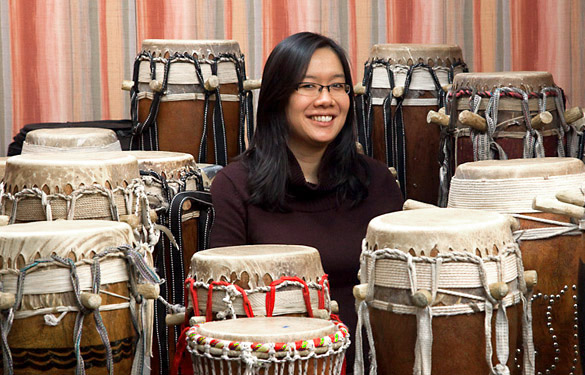 Tang's classes engage students with new cultures and a greater
awareness of global issues. Her "Music of Africa" classes study
the role of music education in lowering the rate of HIV/AIDS
in Uganda. That ties music to global health. A recent MIT
bioengineering graduate traces his career focus in global health
to the perspectives he gained in his "World Music."

ETHNOMUSICOLOGIST Patricia Tang specializes in West African and world music, especially the ancient tones and long-guarded practices of "sabar"—the name for a tall, traditional Senegalese drum made of mahogany and goatskin, and for the drumming culture and life based on the instrument.

In her classes, Tang teaches MIT students how to pay the same careful attention to the complex percussive rhythms of sabar as they would to subtle scientific phenomenon. They are also invited to widen their perceptions—to see sabar in a broad global context.

Tang's "World Music" class exposes students to the world's evolving musical traditions, and gives them a greater awareness of global issues. “In my 'Music of Africa' class," Tang says, "we study the role of music education in lowering the rate of HIV/AIDS in Uganda. That ties music to global health.”

Tang’s ethnomusicologist research focuses on the “griot” drummer families among the Wolof, the Senegalese ethnic group whose musicians are historically noted for their mastery of sabar. Her engagement with this great Senegalese tradition is a good example of what Goethe called the "elective affinities," the traditions that call to us, from beyond our cultures of origin.

As a Chinese-American scholar-musician trained in classical music and performance, Tang was not perhaps the most obvious person to find herself packing up her beloved violin and research tools—tape recorder, video camera, pens, and paper—and traveling to Senegal to study Wolof culture and music.


Masters of the Sabar

Her remarkable 2007 book, Masters of the Sabar: Wolof Griot Percussionists of Senegal, is the fruit of that journey, and her research and life in the coastal city of Dakar. In it, she narrates her experiences as novice drummer, classically trained violinist, social scientist, and patient translator of griot oral and percussive languages.

The chapter, “If a Snake Bites You, You Will Think of Death” features several pages of Western notation applied to sabar repertories. At first blush, these look familiar to Western eyes, but closer inspection reveals Tang is transcribing non-Western percussion rhythms, so individual notes are altered to reflect sabar sounds. To communicate fully the experience of the living sabar sound, Tang provides a CD recording with the book, which allows readers and students to follow her research insights by listening to the spectacular drumming itself.

"MIT students crave hands-on learning. They remember
the musicians they meet, the physical engagement with
instruments, and the tremendous creative experiences they
have in the music section. That's the experience they take
into their professional and personal lives."

A striking aspect of Tang’s research is her original transcription of the oral code that griots use to recall, pass on, and perform various ancient sabar sounds. Tang's key to vocal mnemonics lists the short words Wolof drummers use to denote basic hand strokes and combinations of strokes; beside each, she carefully “translates” into English text. For instance, in this musical glossary, “gin” is her word for a left hand stroke on the center of the drum that makes a bass sound, while “cek” is the word for a stick stroke that taps the edge of the drum’s head to make a non-resonant click.

Tang demonstrates how the glossary works while sitting in her MIT office, a world away from Dakar. Reading from her book, held in her right hand, she beats a rhythm on her desk with her left hand, calling out each stroke with its definition. “Gin, left hand strikes the drum center; pin, left strikes near drum edge; pax, fingertip pads strike; ja; ca; tet …”

As the drumming demo continues, the groove on a desk can make you smile, and feel that you are, subtly, not only in the geography of 02139, but somehow closer to Senegal. This is a glimpse of how Tang reveals to her students that a culture is embodied in its music, and how she opens her students to a whole world through the drum.

Like many MIT students, Tang grew up at home with multiple cultural influences, moving easily among overlapping, layered traditions. She was born in Amherst, Massachusetts to parents who grew up in Taiwan speaking Mandarin (Tang's first language) as well as English. Very early in her life, Tang's parents introduced their daughter to western classical music, and she began studying the violin at age five.

But her career in ethnomusicology, the combined study of music and culture that eventually took her to Senegal, came about through an unexpected event, a surprising experience she likes to share with her students, many of whom are still discerning their professional and creative calling. As an undergraduate at Brown University, Tang was preparing to major in philosophy and organizing her studies around that goal. During that time, however, she discovered the Ghanaian Drumming Ensemble, led by master drummer Martin Obeng. “Obeng was a demanding teacher," Tang says, "a tradition-bearer who shared his traditions directly, and I was intrigued by the musical challenge.”

After a year studying Ghanaian polyrhythmics with Obeng, it had become clear to Tang that she wanted a life engaged with music. She shifted her major, graduated with a degree in Music, and after graduation, went on to Harvard University as a doctoral student in ethnomusicology. A month in Dakar in 1996 further sharpened her focus. “Drumming was everywhere,” Tang recalls, and in that atmosphere her plan coalesce to study the role of traditional sabar drums within a contemporary genre called "mbalax," a fusion of Latin dance music and Senegambian elements that arose in the 1970s.

Tang's remarkable 2007 book, Masters of the Sabar, is the fruit
of her research and life in Dakar. In it, she narrates experiences
as novice drummer, classically trained violinist, social scientist,
and patient translator of griot oral and percussive languages.

The Wolof of Dakar

She moved to Dakar, lived with a prominent Wolof griot percussionist family, and began to interview drummers and singers. Already fluent in French—a major asset in Francophone Senegal—Tang also mastered the Wolof language, the predominant language of Senegal. She took sabar lessons, learning a new musical language just as she urges her MIT students to do. Her teacher in Dakar, Lamine Touré, a master griot percussionist, eventually became co-director (with Tang) of Rambax, MIT’s immensely popular Senegalese drumming group.

While learning to play sabar, Tang was invited to play violin with Nder et le Setsima Group, a Senegalese mbalax star and his cracking band. In addition to performing with Nder, Tang gradually became involved in managing the group as it toured France and the US, playing in New York’s Central Park, and Boston’s Paradise club. She found that world music management is not her cup of tea, but is putting her discoveries about the music industry to creative use, devoting her 2010 sabbatical to writing a study of the globalization of Afro-pop and its consequences for musicians as they join—or are swept up in—the living stream of world music.

Tang also plans to keep her own music making alive, with performances and her ongoing collaboration with the Rambax troupe. A piano keyboard in her office hints at adventures in sound to come. With her colleague Keeril Makan, Tang shares a profound delight and commitment to a tactile experience of music. It is an outlook well suited to MIT students.

“MIT students crave hands-on learning," Tang observes. "And they remember the actual musicians, the physical instruments, and the discovery they have in the music section. That's the experience they take with them into their professional and personal lives." 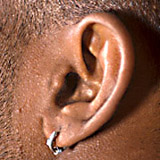 State of the Art | Introduction